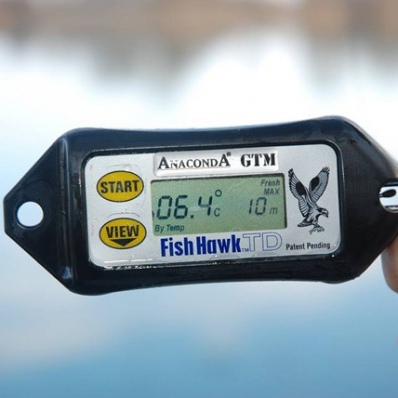 The big benefit: find the thermocline in the wink of an eye!
The underwater temperature is often the secret to success. In each season the observance of the temperature changes, even very small ones, is crucial. The Fish Hawk GTM allows the fisherman to recognize virtually, exatly and rapidly, what are the temperatures at each meter depth at your Hot Spot. By this way he gives you the double of information than the very sought-after GTM 40 T+  that mesured only all two meters.

History
Before the new Fish Hawk was released, all successful fisher swear by the GTM 40 T+!
The poccession of such a tool was so important that no one who ever bought one ever sold it again and due to this the prices of secondhand models were even higher than for new ones.

Reference point: In springtime fish just above it, as the vegetation is developed much more due to the high temperatures. In summertime (when it is very hot) fish just underneath it, as colder water contains more Oxygen.

Carp-fisher have waited for years for the new Fish Hawk GTM gewartet!
Now it is again the company Sänger that comes up with the brand new and improved model, the Fish Hawk GTM. The batteries last  7-10 years (5 are garantied), the employement is self-explaining, extremely easy.